New York City is one of the most diverse cities in the country, and it's time our voting laws reflected the diversity of the voting population. 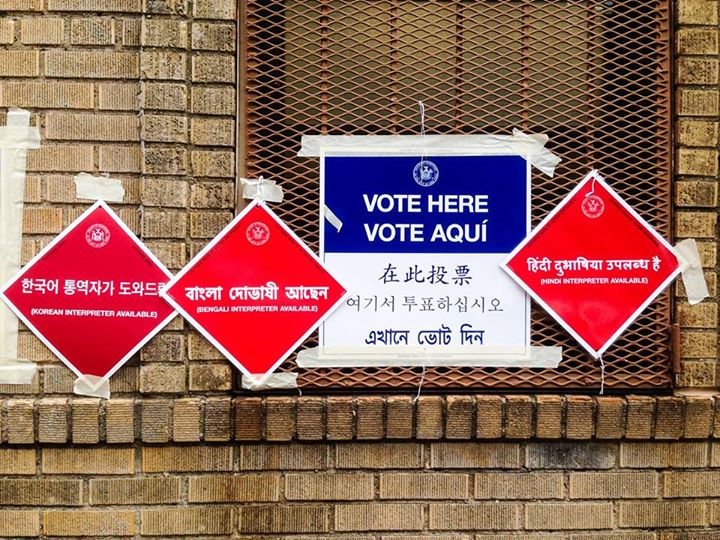 Earlier this year, we finally saw a host of long-overdue voting reforms signed into law, including early voting, consolidating primary election dates, automatically updating a voter’s registration when they move anywhere within New York State, and allowing 16- and 17- year olds to pre-register to vote. While these reforms will improve the election process as a whole, today we’re going to talk about reforms that we still need to implement in order to make the Election Day experience better for everyone!

Electronic Poll Books
Long lines at the polls are frustrating for voters and poll workers alike. One way to reduce wait times on Election Day is implementing electronic poll books across New York State. Using e-poll books, poll workers can check voters in using a tablet, rather than searching for a voter’s name in a paper poll book. This would also allow voters to check in at any table, rather than having to remember their election district and report to the corresponding table to check-in. Additionally, if a voter arrives at the wrong poll site by mistake, electronic poll books would make it easy for poll workers to find a voter’s correct poll site.

Allow Poll Workers to Serve Split Shifts
On Election Day, poll workers are required to work 15-hours shifts to open and close the polls as well as staff the poll site for the entire day. These long shifts contribute to poll worker fatigue, which can lead them to make mistakes when checking in and directing voters. Due to these demanding hours and low pay, Boards of Election around the state have had an increasingly difficult time recruiting workers who are willing to work the full 15-hour day. Allowing poll workers to work a half-day instead would cut down on the number of errors made by exhausted workers near the end of the voting period and encourage more New Yorkers to serve in this capacity.

Make Translation Services Available in Languages beyond What Is Required by the Voting Rights Act
Did you know that in New York City, there are about 1.8 million people with limited English proficiency? That’s about 23 percent of the city’s total population. Voting on Election Day can be confusing for non-English speaking voters, especially when voting materials in their first language are not available. By law, New York City poll sites must provide language assistance for the languages covered under the Voting Rights Act. However, many New Yorkers also speak languages that aren’t covered under the Act, and they are faced with unique challenges every Election Day. Other cities like Los Angeles and Chicago go beyond what is required by the Voting Rights Act to provide assistance in additional languages, and given how diverse our city is, New York should too.

The Voter Friendly Ballot Act
Let’s face it: New York’s ballot is confusing, complex, and poorly laid out. And bad ballot design makes voting frustrating and more time-consuming. As the Brennan Center reports that “poor design increases the risk for lost or misrecorded votes among all voters.” It’s even worse for already underrepresented communities, such as low-income and minority communities, the elderly, and disabled voters.  In the 2018 state primary election, there were about 12,000 unrecorded votes in New York City alone. This could have been prevented with better ballot design.

To that end, the Voter Friendly Ballot Act would cut down on the number of languages that appear on each ballot, and this would allow for increased font size, enhancing ballot readability. Additionally, according to the Act, political parties would be listed in customary order, and candidate names would not be separated by a perforation. In fact, the Voter Friendly Ballot Act would also make the multi-page perforated ballots New Yorkers had to use during the 2018 general election unnecessary.

Voting is something all eligible New Yorkers should get in the habit of doing.
But the lack of updated technology, poll workers, language services, and ballot clarity have been compounding factors in making it harder and more frustrating for New Yorkers to vote. The reforms we’ve outlined here would take down these unnecessary barriers to the political process, and we hope the State Legislature will adopt these in the very near future.