Five Reasons Why Early Voting Is Good For Our Democracy

Last week, we launched our Early Voting Challenge to raise awareness about early voting coming to New York City this fall. Make sure to take the Challenge if you haven’t already! 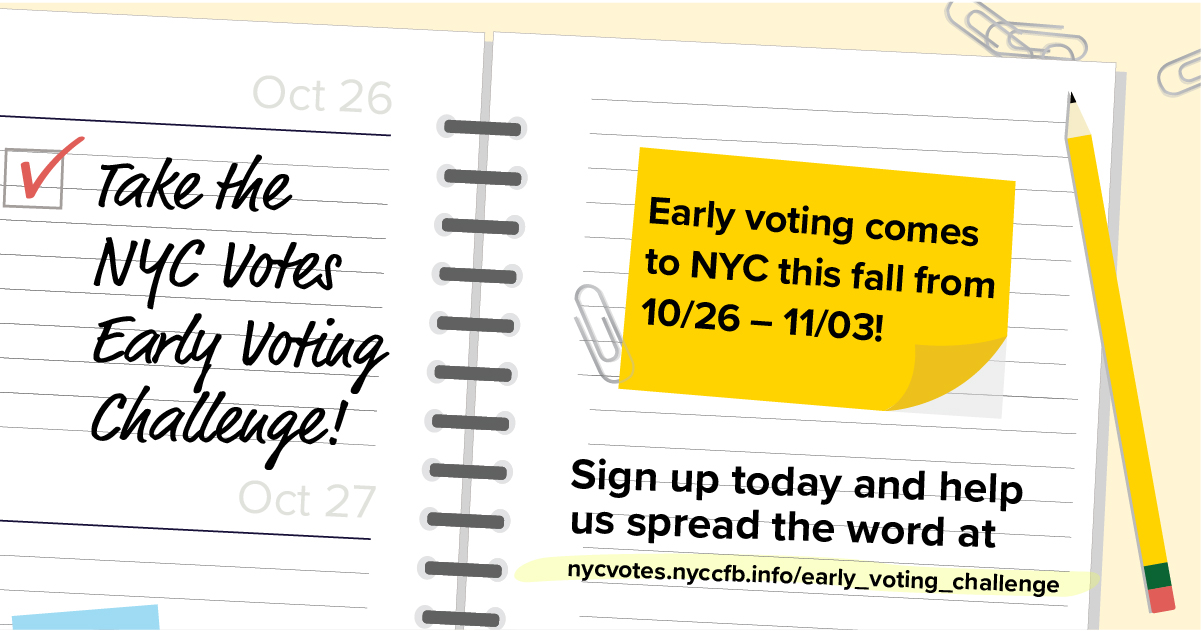 Earlier this year, we posted about what an important moment this is for us and voters everywhere, and now that New York’s very first early voting period is only a month away, we wanted to highlight five reasons why early voting helps strengthen our democracy.

1. Being able to vote early, including on the two weekends leading up to Election Day, gives voters more opportunities to cast their votes at the polls. Instead of voting all on one single high-stakes weekday, voters will be able to pick a time that works for them, from a range of dates and hours.

2. Early voting provides flexibility to voters who can’t take time off to vote during the week. Election Day is usually on a weekday, and it’s not a holiday that most workers get time off for. While in New York State, your employer is required by law to provide you with three hours of paid time off to vote on Election Day (as long as you provide two days’ notice), early voting provides voters with even more options. It also helps to address historic and deep-rooted inequalities in the labor force that often prevent minorities or low-income New Yorkers from participating in the electoral process.

3. Having more days for voting means faster and more efficient Election Day lines. Early voting means Election Day lines are shorter, and poll workers and election administrations can devote more time to making sure voting processes are working smoothly each day. And when the system works more efficiently, voter confidence in the system grows, which is key for encouraging active participation in our elections.

4. Early voting can lead to more reminders about upcoming elections. With an early voting period spanning nine days before Election Day, good government groups and voter engagement organizations have more opportunities to remind voters about voting and to put out informational resources like the official New York City Voter Guide further in advance. This is especially important for local elections, which often see less participation in comparison to higher profile elections like presidential ones. The good news is that one in five voters across the country voted at an early voting site during the 2018 midterm elections, more than double the amount of voters who voted early in the 2014 midterms.

5. Early voting also helps candidates and campaigns do more focused outreach to constituents. Because early voting gives voters more time to cast their votes, campaigns can do more targeted outreach, focusing their energies and efforts on undecided or drop-off voters.

Will you take the Early Voting Challenge today, and spread the news in your neighborhood and community? Our city’s democracy is only as strong as the voices of its citizens, and early voting gives us the time, flexibility, and opportunity to make our voices heard.

Are you excited about being able to vote early this fall? Tell us in the comments below!