Civic Education, Representation, and a Seat at the Table: Youth Perspectives at the Voter Assistance Advisory Committee Hearing - NYC Votes

Civic Education, Representation, and a Seat at the Table: Youth Perspectives at the Voter Assistance Advisory Committee Hearing

The NYC Votes Street Team recently hosted the Campaign Finance Board (CFB) and the Voter Assistance Advisory Committee’s first-ever youth-centered public hearing, “We the Young People.” The Voter Assistance Advisory Committee (VAAC) advises the CFB on its voter engagement efforts and recommends legislative and administrative changes to improve NYC elections. Over 60 young people attended the hearing, and many spoke about their experiences as young New Yorkers, leaders, and activists. Read on for a recap from our Street Team about the event!

Contrary to the popular myth that young people are “lazy,” or “uninterested” in civics, youth advocates came out in droves to testify and listen to each other’s stories at Wednesday night’s “We the Young People” Voter Assistance Advisory Committee (VAAC) hearing. The excitement in the room was palpable—even the rain could not stop these young leaders from attending. The hearing, organized by the NYC Votes Street Team, was designed to amplify young people’s voices, which are often left out of discussions of government and politics. After connecting with more than 1,400 young people in citywide programs throughout the summer, the Street Team conducted extensive outreach to get more than 60 attendees in the room on August 7, at least 20 of whom provided testimony. 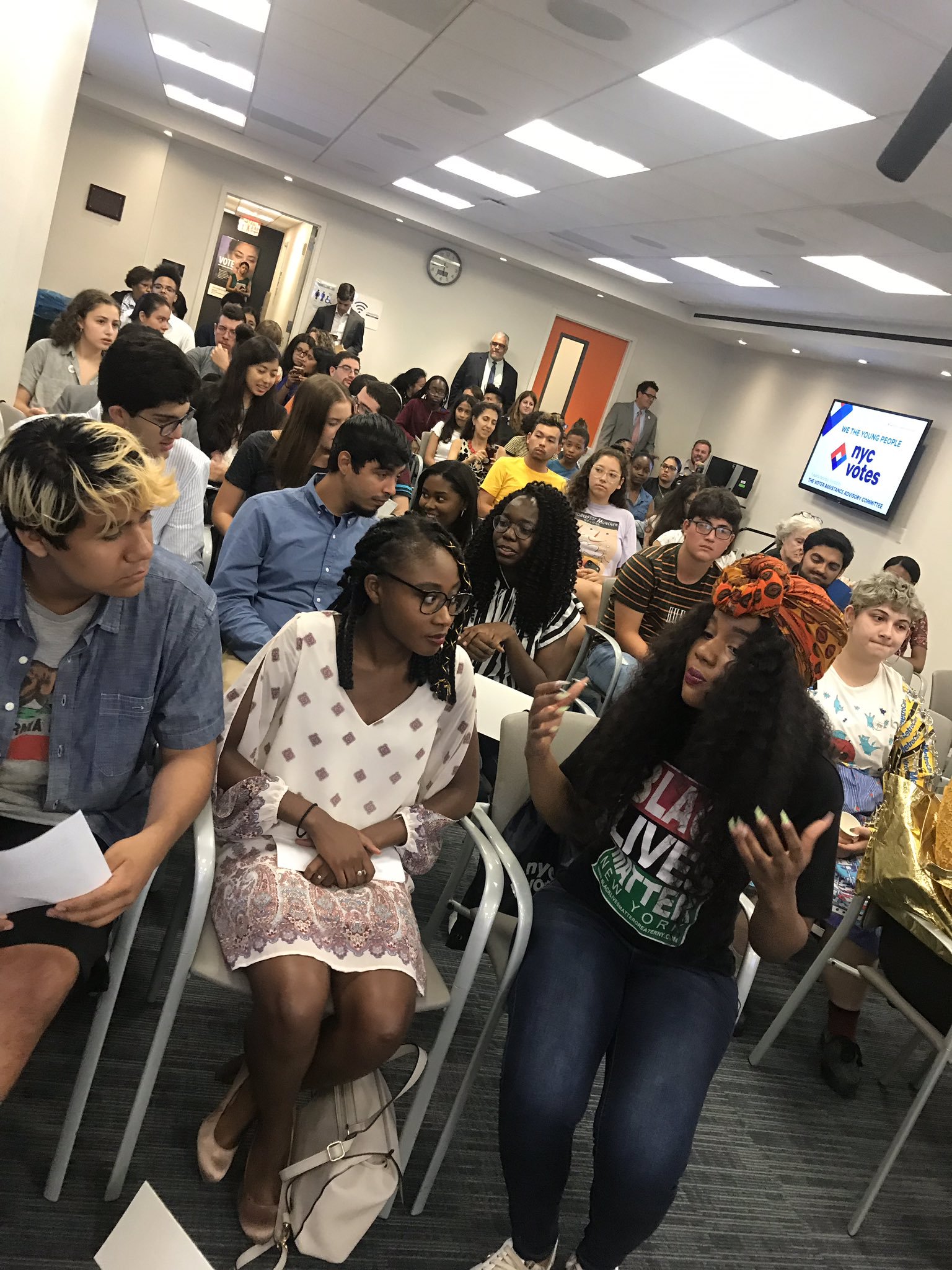 One of the main points echoed by testifiers at the VAAC hearing was the need for representation. These advocates stressed the need for youth representatives and young candidates in local elections to create leadership that accurately reflects communities around New York City. Black Lives Matter Greater New York President Nupol Kiazolu, kicked off the testimony with a powerful call to action. Speaking on New York City’s civic education requirements, Kiazolu said, “It is not a privilege to have access to civics, which helps us function in a so-called democracy. It is a right.”

Testifiers delivered impassioned and eloquent statements with wisdom well beyond their years, with individuals as young as 14 addressing the VAAC. In addition to civic engagement, these young people shared their concerns regarding school segregation, educational equity, and access to resources. Fundamentally, they emphasized, a young person’s most basic needs must be met in order for them to be civically engaged, with their rights both acknowledged and legitimized.

Public Advocate Jumaane Williams, who sits on the VAAC as an ex-officio member, was in attendance, listening attentively to some of his youngest constituents. He thanked the testifiers for coming, before posing questions to the group to establish a connection between the issues and voting, as well as action items for the VAAC. Brianna Cea of Generation Vote provided some concrete suggestions, including focus groups or surveys, voting reforms, comprehensive educational workshops, the establishment of a youth advisory board, and youth voting campaigns. 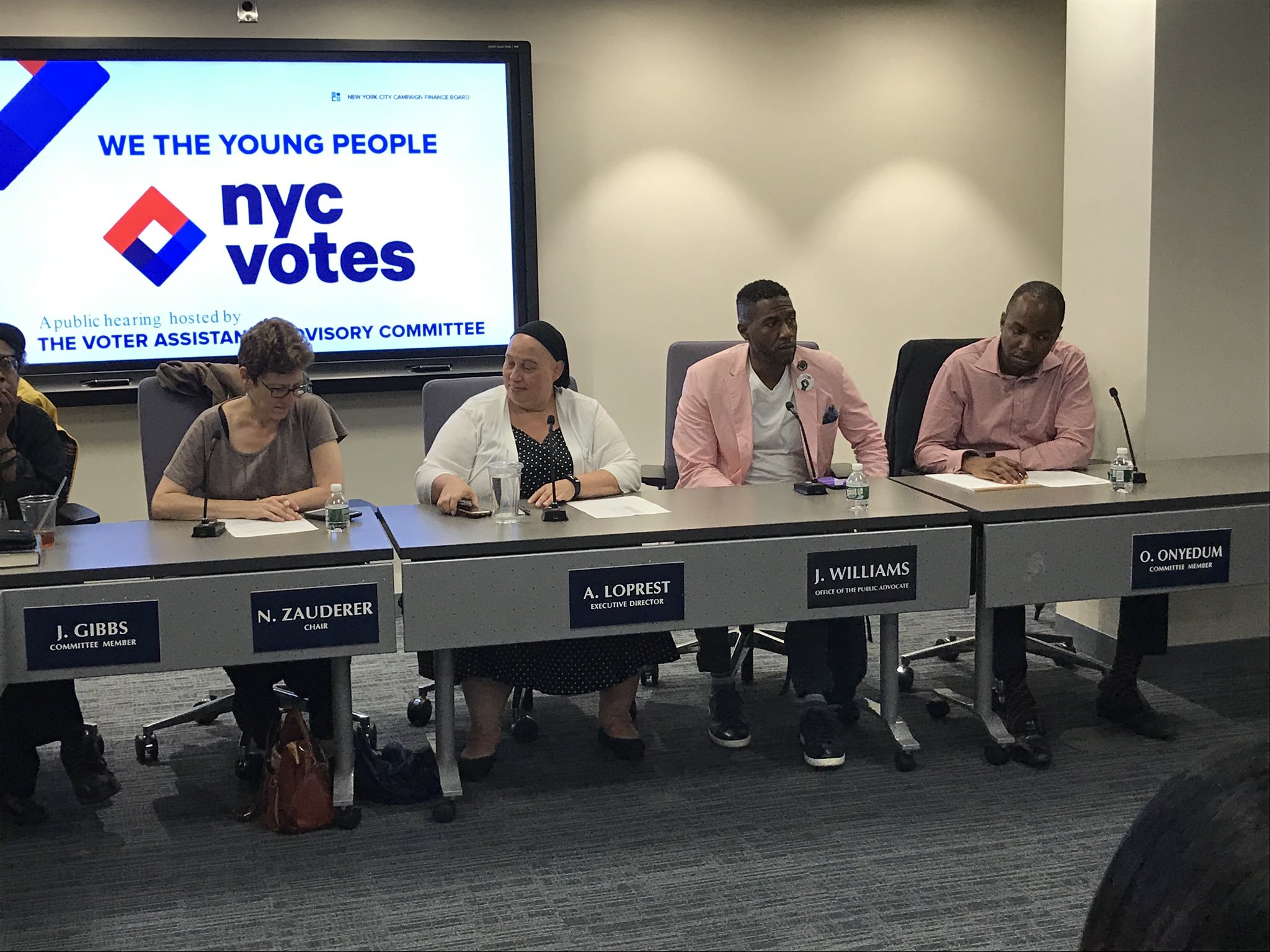 NYC Votes Street Team member Maya Vesneske closed the evening with the Street Team’s testimony, giving recommendations for improved youth workshops, the establishment of a youth board, and increased youth leadership in New York City. Following their formal statements, attendees shared Instagram handles and discussed their upcoming events over pizza, and there was a pervading sense of camaraderie and empowerment in the room.

Though the “We the Young People” hearing was the first of its kind for the VAAC, we know that this event is just the start of increased engagement between NYC Votes and young New Yorkers.

What are some ways you can think of to engage more young people about voting and their elections?